Cravings for a refreshing, citrusy beverage can be satisfied in countless ways.

Whether it’s grabbing a glass of freshly-squeezed orange juice or reaching for an ice-cold can of soda, one thing is certain: citrus drinks have been enjoyed the world over since time immemorial.

Two iconic favorites that have transcended generations and continue to enjoy immense popularity are Fanta and Crush.

We’ll take a look at these two beverages to examine their history, ingredients, taste profile, and more!

Be prepared to learn what sets them apart from one another as well as which comes out on top – will it be Fanta or Crush?

It is a brand of fruit-flavored carbonated drinks created by The Coca-Cola Company.

It is available in 180 countries and is enjoyed more than 130 million times every day around the world.

Fanta, the word, is derived from the German word “fantasie,” which translates into “imagination.”

The drink actually originated as a cola substitute in Germany under a World War II trade embargo for Coca-Cola ingredients in 1940.

After World War II was over, Coca-Cola regained control of the German soda plant and made Fanta international.

Currently, there are more than 100 flavors worldwide, but Fanta Orange is the most popular flavor.

For a long time, Costa Rica had an exclusive Fanta flavor, called Kolita which was very popular in Central America during the 1980s and ’90s. It is still available in Costa Rica.

Japan has about 70 flavors including ”Genius Energy,” ”The Mystery Fruit,”  and Hip Hop” flavor.

This drink is more popular in South America and Europe than in the US. In terms of volume, Brazil is the largest consumer of Fanta worldwide.

In 2019, Fanta launched a jet black version of the blood orange flavor to celebrate Halloween.

It has 110 calories and it does not contain any cholesterol, fat, fiber, or protein. The total amount of sugar in this beverage is 30 grams. Also, it has 35 milligrams of sodium.

Note – Acesulfame potassium is a highly versatile artificial sweetener that is used in numerous drinks and foods. It has a sweetening power 200 times greater than table sugar.

But, according to the data, Acesulfame potassium can disrupt metabolic processes and interfere with bodyweight, appetite regulation, and blood sugar control.

More importantly, former director of the International Agency for Research on Cancer – Lorenzo Tomatis, believes that the tests which established that this artificial sweetener is safe for human consumption had serious design flaws.

Crush is a brand of carbonated soft drinks which was created in 1911 by Neil C. Ward, a Canadian beverage and extract chemist.

This beverage is available in orange, strawberry, pineapple, grape, and peach flavorings. It has sufficient variety for the whole family to enjoy. Also, most flavors are caffeine-free.

It mainly competes with Coca-Cola’s Fanta.

In 1980, the brand was sold to Procter & Gamble, an American consumer goods corporation.

Then in 1989, Cadbury Schweppes bought it from Procter & Gamble and made their drink business and called it Dr Pepper Snapple Group.

However, on January 29, 2018, Keurig Green Mountain acquired Dr Pepper Snapple Group in an $18.7 billion deal. Keurig Dr Pepper is the name of the new company.

This drink is very high in sugar – about the sugar content in 2 snickers candy bars.

Yellow No. 6 is an orange-yellow dye that is used in sauces, candy, preserved fruits, and baked goods. This food additive provides no nutritional value.

It is classified as a level 3 carcinogen, meaning that it caused cancerous tumors in lab animals, however, there are insufficient well-done studies in humans to link it to cancer.

Red Dye #40 is one of the most commonly used artificial food dyes in the United States and is found in items like candies, beverages, processed meats, cheeses, ice pops, salmon, liquid suspensions of prescribed medicines, and some over-the-counter medications.

Side effects related to this food additive include – hyperactivity, headaches, sleep problems (insomnia), decreased concentration, and a feeling of “crawling out of one’s skin.”

Bottom Line: Fanta vs Crush – Which Is The Best Orange Soda Brand? 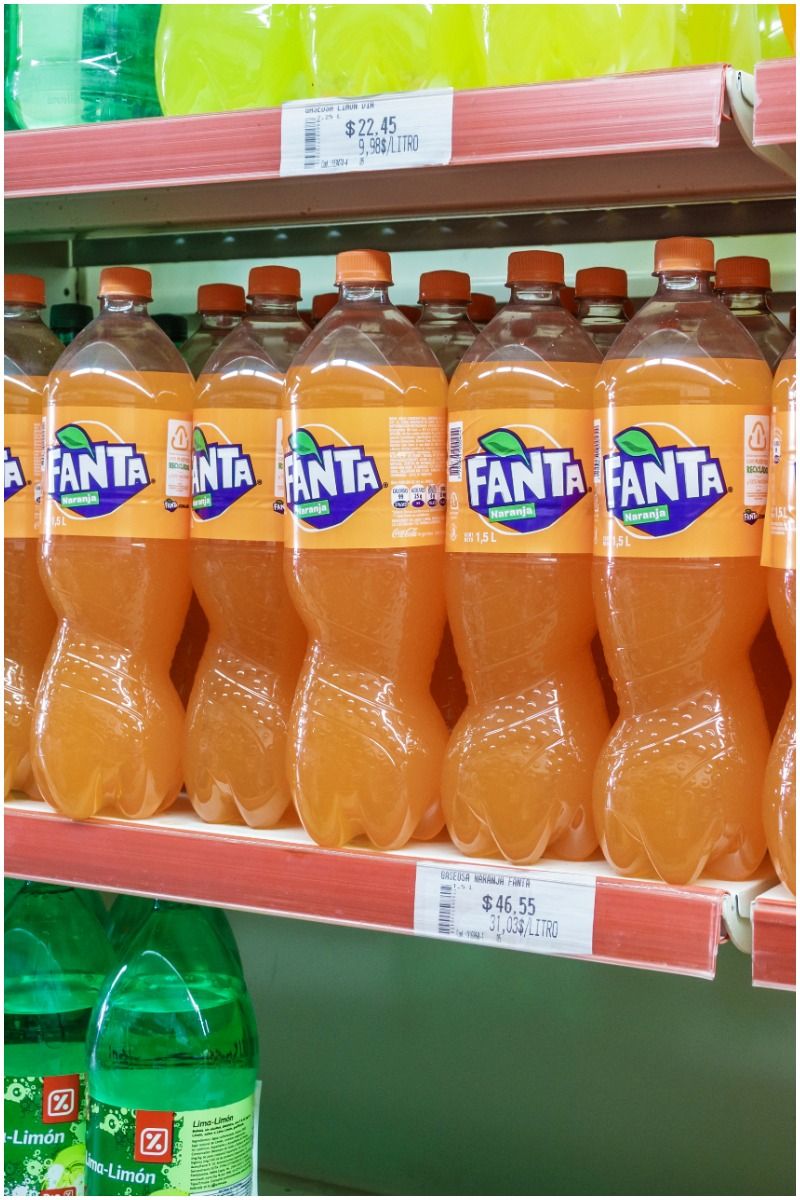 Soft drinks represent a huge industry in the US. For instance, in 1989, Americans consumed more soda than tap water, averaging 46.7 gallons per person/year.

The amount of sugar in these drinks will give a lot of unnecessary stress on your pancreas, and it will make it hard to produce insulin (a peptide hormone produced by beta cells of the pancreatic islets which keeps your blood sugar level from getting too high or too low) for fulfilling your body’s need of it.

According to studies, drinking one or two sugary drinks per day will increase the risk for type 2 diabetes mellitus with approximately 25 percent.

Moreover, in 2013, 25,000 obesity-related American deaths from cardiovascular disease, type 2 diabetes, and cancer are strongly associated with soda intake, according to the Harvard School of Public Health.

Lastly, these sodas are void of the essential nutrients your physical body needs, and you still should select more nutrient-rich beverages whenever possible, and not consume these beverages too often.

READ MORE: Sprite vs 7UP For Upset Stomach

What About Sunkist Orange Soda?

Sunkist is an orange-flavored soda named after a citrus fruit brand. It is produced by Dr. Pepper/Snapple Company, now known as Keurig Dr Pepper.

In addition, it has a sugar content of 52 grams per 12 ounces.

In conclusion, Sunkist may be the worst orange soda brand for your health due to its caffeine (even more caffeinated than Pepsi Cola) and sodium benzoate content.

Sodium benzoate is a food additive that has plenty of side effects, including – nausea, vomiting, hyperventilation, stomach ulcer, headache, dizziness, shortness of breath, and lightheadedness.

Regarding the taste, Orange Crush used to be the best orange soda, until a period back in the ’80s, but currently, Sunkist may well be the best beverage of these three.

READ THIS NEXT: Cheez-It vs Cheese Nips – Comparison