This article reveals the differences between subungual hematoma and melanoma:

It refers to blood that is trapped under the nail after trauma.

The damage is caused by a crush injury or a direct blow (such as – getting a finger pinched in a doorway) to the distal phalanx.

The injury is classified by the percentage of the area beneath the nail which is involved and is manifested by dark red-to-black discoloration and pain of the nail bed.

Melanoma is a type of cancer that develops in the pigment cells present in the skin, called melanocytes. It is one of the fastest-growing cancers, particularly in young women under 30.

Subungual melanoma is a form of skin cancer that occurs under fingernails. 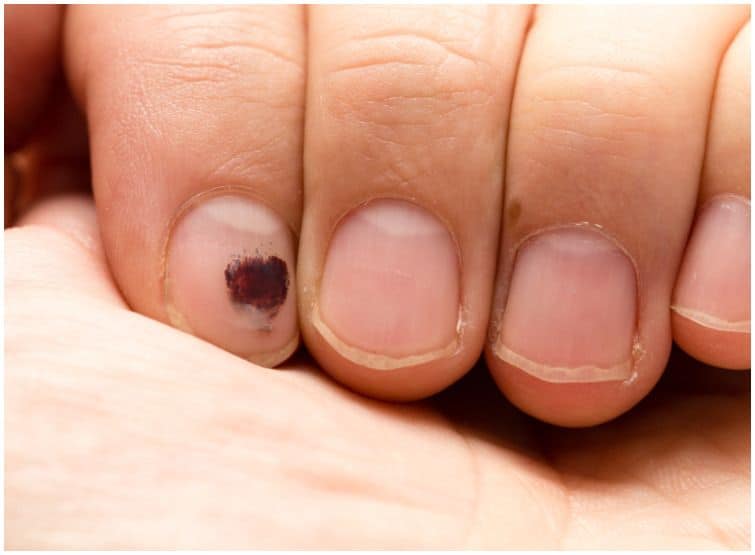 SUH occurs when an injury (like – hitting your finger with a hammer) breaks open blood vessels under the nail, causing blood to become trapped in one spot.

In addition, it can be caused by repetitive trauma in athletes, like dancers or marathon and ultramarathon runners as well as due to ill-fitting footwear.

The exact cause of the development of SUM is unknown.

But, it is known that its development is not related to sun exposure.

Potential causes may include:

Common symptoms of SUH can include:

Common symptoms of SUM can include:

A doctor can often diagnose a SUH based on any recent trauma you report and visual inspection of the nail.

Also, the following tests may be done:

Like most cancers, early detection of SUM is optimal.

Most doctors diagnose this type of melanoma by examining the spot causing concern and by doing a punch biopsy.

The treatment of a SUH requires subungual decompression, which is typically done by creating small holes in the nail plate.

In the case of a subungual hematoma that is greater than 50 percent of the nail bed, the nail should be removed.

Also, the nail bed laceration should be repaired for optimal functional and cosmetic results.

Trephination (a surgical intervention where a hole is incised) is not indicated if:

If trephining is used, the sufferer should understand the potential risk of developing osteomyelitis (infection of the bone).

Treatment of SUM may include:

Subungual hematoma, also known as runner’s toe or tennis toe, is an injury of the nail bed in which bleeding develops under the nail.

Bleeding from the rich vascular nail bed leads to substantial pain and discomfort. The injured area under the nail may also have a blue-black color. Trephining is a good method of relieving pain and releasing trapped blood.

Melanoma is a form of skin cancer that occurs when melanocytes (pigment-producing cells) mutate and become cancerous.

Subungual melanoma, also referred to as cancer of the nail unit, is a type of melanoma of the nail that affects the nail matrix (the tissue beneath the nail base).

SUM commonly resembles normal bruising of the nails and may be difficult to identify from a subungual hematoma. SUM can cause a dark mark to form under the nail, but, it is not linked to an injury and it does not cause pain.

Therefore, to determine whether your nail discoloration is caused by a SUH or SUM, your doctor will mainly focus on whether you engage in a sport, such as tennis or running, or you have had a recent injury to your nail.

Subungual melanoma appears like a streak along the nail. As this type of melanoma progresses, there may be a few streaks of varying shades on the affected nail.

READ THIS NEXT: Essential Oils For Thyroid Nodules