Gluconeogenesis vs Glycolysis: what’s the difference?

They both begin with the letter “G.”

They both are metabolic processes.

Yet, gluconeogenesis and glycolysis are two different things.

With glycolysis, it is the first step in breaking down glucose to create pyruvate molecules.

This process happens in the cytoplasm for both eukaryotic and prokaryotic cells.

Meanwhile, gluconeogenesis is the reverse of this, where the two pyruvate molecules join together to create a glucose molecule, mainly within the liver, to store glucose as glycogen.

However, don’t make the mistake of thinking this is merely a mirror image to mimic glycolysis.

Understanding these metabolic processes in greater detail will reveal how much they have in common, as well as what makes them uniquely different from one another.

With gluconeogenesis, it is the production of glucose that comes about from sources that are not carbohydrates.

Pyruvate is converted into glucose in a process that is somewhat like the reverse of glycolysis. However, there are three reactions that make it irreversible, occurring in glycolysis that has four new reactions.

In the mitochondria, pyruvate is converted into oxaloacetate by two new reactions.

This oxaloacetate is decarboxylated as well as phosphorylated into the cytoplasm as phosphoenolpyruvate by these new reactions.

This makes it different from glycolysis, though that’s not the only thing.

What else makes these two metabolic processes different comes down to the hydrolysis of glucose 6-phosphate and fructose 1,6-bisphosphate.

The process of gluconeogenesis works in the liver using alanine and lactate.

As raw materials, these are created by active skeletal muscles, thanks to pyruvate.

In other words, gluconeogenesis is reciprocal and regulated with glycolysis.

One pathway tends to be quite active while the other is blocked.

It has control points at the steps, which are regulated by the enzymes.

When there is an abundance of glucose, glycolysis is triggered by the signal molecule – fructose 2,6-bisphosphate – when it is at high levels.

Then the two other enzymes – pyruvate carboxylase and pyruvate kinase – become regulated as well. 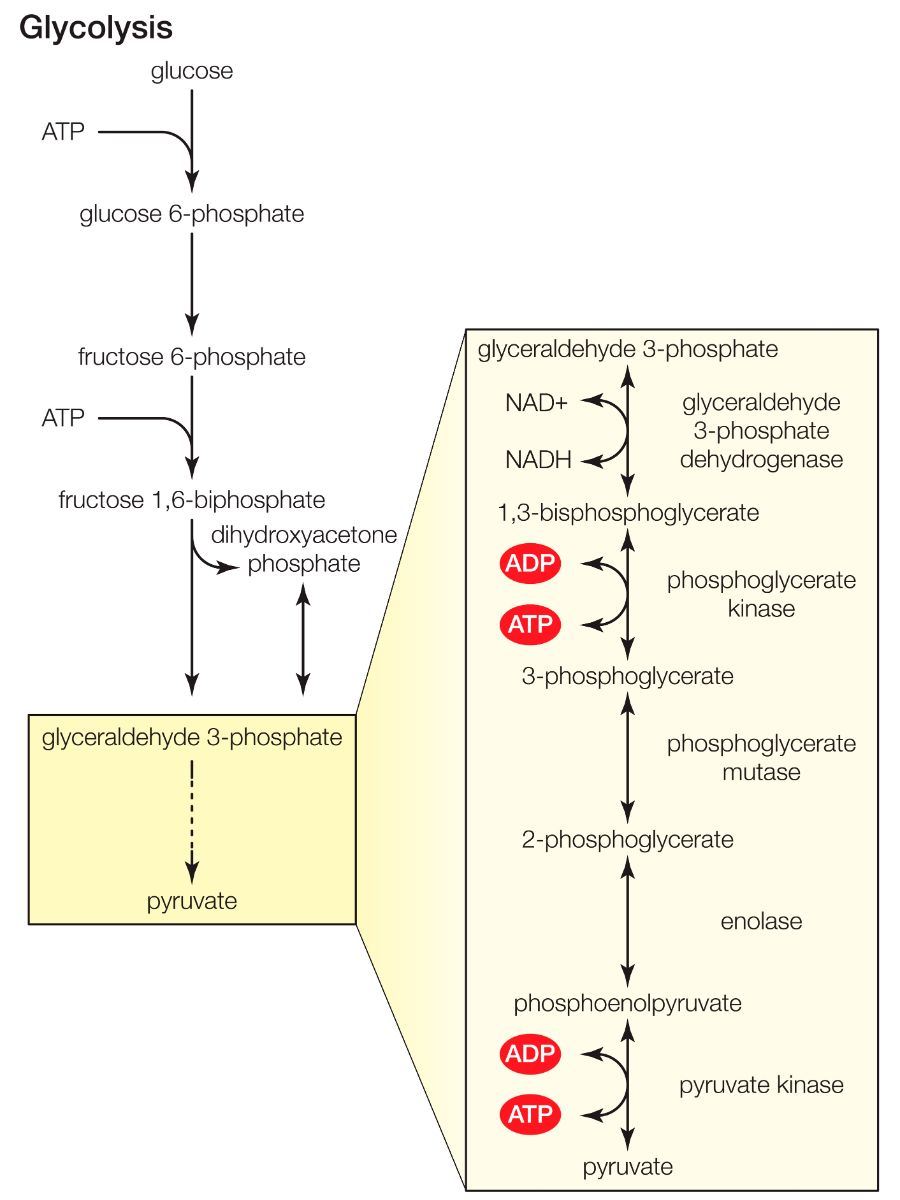 As mentioned, the reactions that take glucose and change it into two pyruvate molecules is what is called glycolysis.

This metabolic process is composed of 10 reactions, each of which occurs in the cytoplasm.

It’s a process that can be split into three distinctive stages.

As an initial step, glucose is converted into fructose 1,6-bisphosphate.

When glucose is converted into fructose1,6-bisphosphate, the cell has accomplished two things – it has trapped glucose in the cell and converted it into a compound.

This compound can then be chopped into three different carbon units.

In the second stage, where the fructose 1,6-bisphosphate is then cut into those carbon fragments.

These are interconvertible fragments, ready for the third and final stage.

In that third stage, the three carbon fragments are then oxidized into two pyruvate molecules to harvest the ATP.

What These Metabolic Processes Have in Common

As mentioned, gluconeogenesis and glycolysis both begin with the letter “G” and are both metabolic processes in the body.

In regards to that first pathway, it is the starting point, though later on, it is the ending point.

Both of these processes occur within the cytoplasm of cells, and they both use water and ATP.

That’s not all they share, though. They both have quite a few other molecules in common.

Since these paths all have multiple steps in the processes, it makes it far easier for the body to have control over the rates.

These can shift greatly during each day and can be impacted by how we eat and exercise.

In fact, that’s why you should understand these processes and how they impact your overall health.

How is Gluconeogenesis vs Glycolysis Different?

Since glucose serves as the main source of energy for just about every life form, it’s important to notice the distinctions between gluconeogenesis and glycolysis.

With glycolysis, it is the first step of breaking down that glucose for cellular respiration.

The cell breaks down that glucose through multiple reactions to make ATP.

As ATP provides the power to pretty much all cellular processes, it’s an important task.

Certain cells like muscle or brain cells need much more energy than normal cells to perform their functions properly.

These cells will require much more glucose than the other ones.

Glycolysis is essentially a catabolic process of the metabolism, while gluconeogenesis is an anabolic one.

With these processes, one of them is depleting the existing glucose just as the other one is replenishing it via organic molecules that contain carbon as well as inorganic ones that are free of carbon.

Additionally, glycolysis takes place in the cytoplasm of all cells, while gluconeogenesis mainly occurs only in the liver.

Thanks to these two processes of metabolism, you can incorporate what you now know for your health and fitness.

For glycolysis to be fueled during activity, you need to take in enough carbohydrates to keep glycogen stores full.

Without it, you’ll experience fatigue.

Gluconeogenesis, as it mostly happens in the liver, can occur when you’re eating a low-carb diet or while you’re sleeping, fasting, consuming excess protein, or in the midst of heavy exercise.

It’s a bit similar to ketosis, only that process uses ketones as fuel rather than glucose.