Replacing sugar with low-calorie sweeteners is a frequent strategy for facilitating weight control.

By providing a sweet taste without calories, artificial or natural sweeteners help lower caloric density of foods and drinks.

Therefore, if you are looking to reduce your caloric intake, then sugar alternatives are worth a look. Here is a comparison of 2 sweeteners:

It is a non-caloric C4 polyol produced by fermentation whose sweetness is 60 to 70 percent greater than sucrose. It is actually the only sugar alcohol which is made mainly by fermentation.

This sweetener was first discovered in 1848 by John Stenhouse, a Scottish chemist.

It is classified as a sugar alcohol thanks to its chemical structure and was first approved by the US Food and Drug Administration in 2001 as a food additive in the US.

Following absorption, this sugar alcohol is rapidly distributed throughout the human body and has been reported to occur in pancreatic cells, hepatocytes, and vascular smooth muscle cells.

But, over 90 percent of the ingested erythritol is excreted unchanged via the urine due to the fact that it is not metabolized by the body.

Also, it seems to be resistant to fermentation by gut bacteria.

It occurs naturally in a variety of fruits, including – watermelon, pears, and grapes as well as fermented products such as miso and wine.

It comes from the leaves of the Stevia rebaudiana plant, that is part of the Asteraceae family.

Stevia, the plant, is cultivated mostly in Kenya, China, India, Argentina, Colombia, Paraguay, the US, Vietnam, and Brazil.

It contains 8 glycosides. They are the sweet components isolated from the leaves of stevia. These glycosides include:

The United States Food and Drug Administration stated that crude stevia extracts and stevia leaf are not generally recognized as safe and do not have US FDA approval for use in food.

But, in 2008, the US Food and Drug Administration approved a high-purity steviol glycoside (rebaudioside A) to be safe for human consumption. 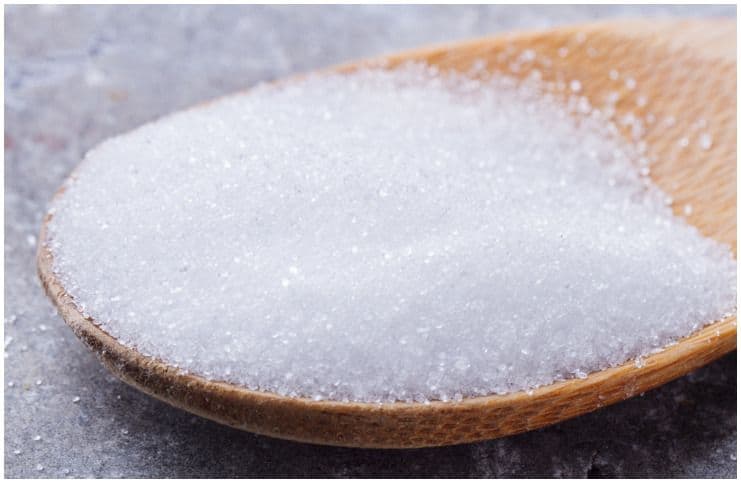 In the US, it is intended for use as a flavor enhancer, humectant (retaining or preserving moisture), formulation aid, stabilizer and thickener, nutritive sweetener, texturizer, and sequestrant.

For example, this sugar alcohol has been used since 1990 in Japan as a component of sugar substitutes, candies, chewing gum, jellies, chocolates, soft drinks, jams, cereals, and yogurt.

Dental caries (tooth decay) remains the most prevalent chronic disease in both adults and children.

The good news is that this sugar alcohol is tooth-friendly since it cannot be metabolized by oral bacteria. Therefore, this sweetener does not contribute to tooth decay.

It does not create an insulin response when ingested, hence, it qualifies for sugar-free and diabetic diets.

Erythritol may be an effective and human-safe insecticide, according to the researchers at Drexel University.

One of the researchers told CBS News – “the more you get them (fruit flies) to consume erythritol, the faster they die.” 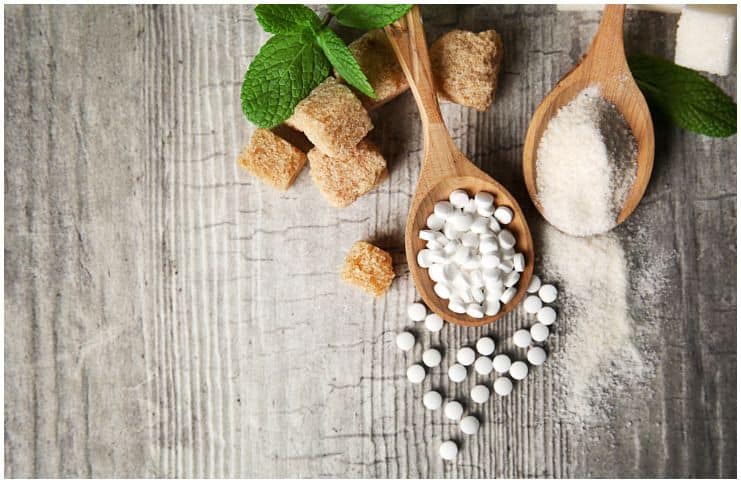 It is used to treat hyperglycemia as well as a diuretic and weight loss aid.

Also, regular consumption of this sweetener can help reduce blood pressure for sufferers with mild hypertension, according to a double-blind placebo study.

Stevioside causes a drop in post-meal blood glucose (sugar) levels in people with type 2 diabetes mellitus, as per a 2004 study that was done at the Department of Endocrinology and Metabolism C, Denmark.

It has a clean, sweet taste, similar to sucrose (table sugar) and a strong cooling effect which shows many synergies with intense sweeteners.

This sugar alcohol is used by many on a low or no sugar low-carb diet. For instance, it is found in the sugar replacement products Zero, Zsweet, and Sweet Simplicity.

Furthermore, Truvia is a combination of stevia and erythritol.

It is naturally very sweet and considered 100 to 200 times sweeter than common table sugar.

Isolated rebaudioside has a sweet taste without the bitterness, while stevioside is sweet, but has a bitter aftertaste which many people complain about when using stevia.

Stevia is found in many foods and drinks, such as – Vitaminwater Zero, Gatorade’s G2, Crystal Light, SoBe Lifewater Zero, and Sprite Green. 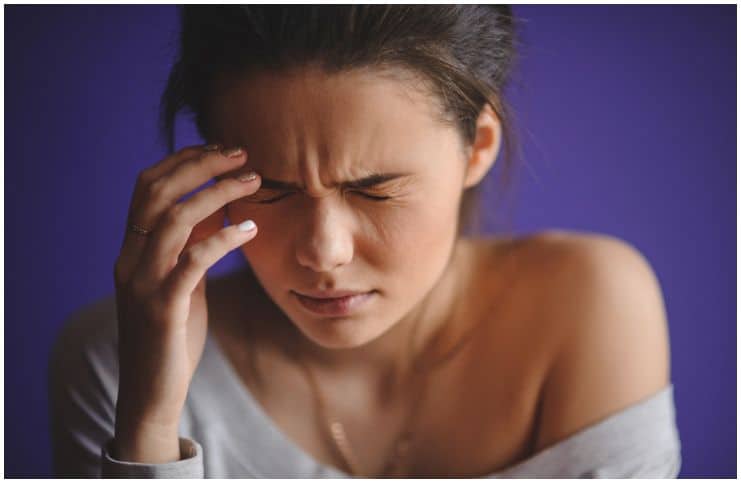 It can cause side effects like – stomachache and headache, in some people, especially when consumed in large doses (over 50 grams).

Moreover, drinks containing this sugar alcohol can potentially cause a severe allergic skin reaction, as per a 2009 study which was issued in the Journal of Dermatology.

Also, according to a 2007 study done at Cornell University, study participants who gained abdominal fat and weight over the course of the study had 1500% higher blood erythritol.

Another recent study established that consuming foods and drinks which contain erythritol causes a change in hormones that control gut movement.

One of these changes is that the food takes significantly longer to move from the stomach to the small intestine.

Diarrhea is another common erythritol side effect.

In some individuals, this sweetener can cause bloating, nausea, or excess intestinal gas.

It might also have undesirable effects on the kidneys, according to the National Kidney Foundation. In some people, this sweetener can cause anaphylaxis, a severe allergic reaction.

There is no clear evidence to suggest that this sweetener is linked to cancer, according to the US National Cancer Institute.

Erythritol can be substituted with other sugar alcohols like lactitol, maltitol, sorbitol, xylitol, and mannitol.

Other artificial sweeteners which have been approved by the US FDA include:

Erythritol vs Stevia – Which Has A Better Taste?

Erythritol is a sugar alcohol with potential applications as a low-calorie, bulk sweetener.

Stevia is a naturally occurring sweetener that is produced from the Stevia Rebaudiana plant.

In conclusion, sugar substitutes can be used in both baked goods and cooked items, however, it is essential to understand that the end result may not be identical to the same product made with the common table sugar.

Regarding taste, unlike many sugar substitutes, erythritol doesn’t have a funky aftertaste. Moreover, it can cause a feeling in your mouth which is similar when you eat peppermint.