How to cook corned beef fat side down or fat side up?

Meat brisket is a cut from the lower chest or breast of beef or veal.

This part of the beef contains a lot of connective tissues. As such, it is tough and must be properly cooked to break down the collagen fibers and tenderize it.

The name corned beef arose from the use of coarse grains of salt called corns in the curing process. Corned beef’s origin is unknown; however, it was very popular during the first and second world wars when meat was scarce, and people had to cure meat with salt to preserve it.

Corned beef is also used as an ingredient in many cuisines, and some people add sugar and spices to their corned beef recipes.

Nitrates could also be added to the corned beef during the salt curing process to prevent the growth of Clostridium botulinum bacteria spores, which cause botulism (a toxic infection that attacks the nerves). These nitrates give the meat a resulting pink color as myoglobin is converted into nitrosomyoglobin.

When no nitrates or nitrites are added to the meat during the curing process, the meat ends up with a gray color, and this variety is sometimes called “New England corned beef.”

Should corned beef be cooked fat side up or down? 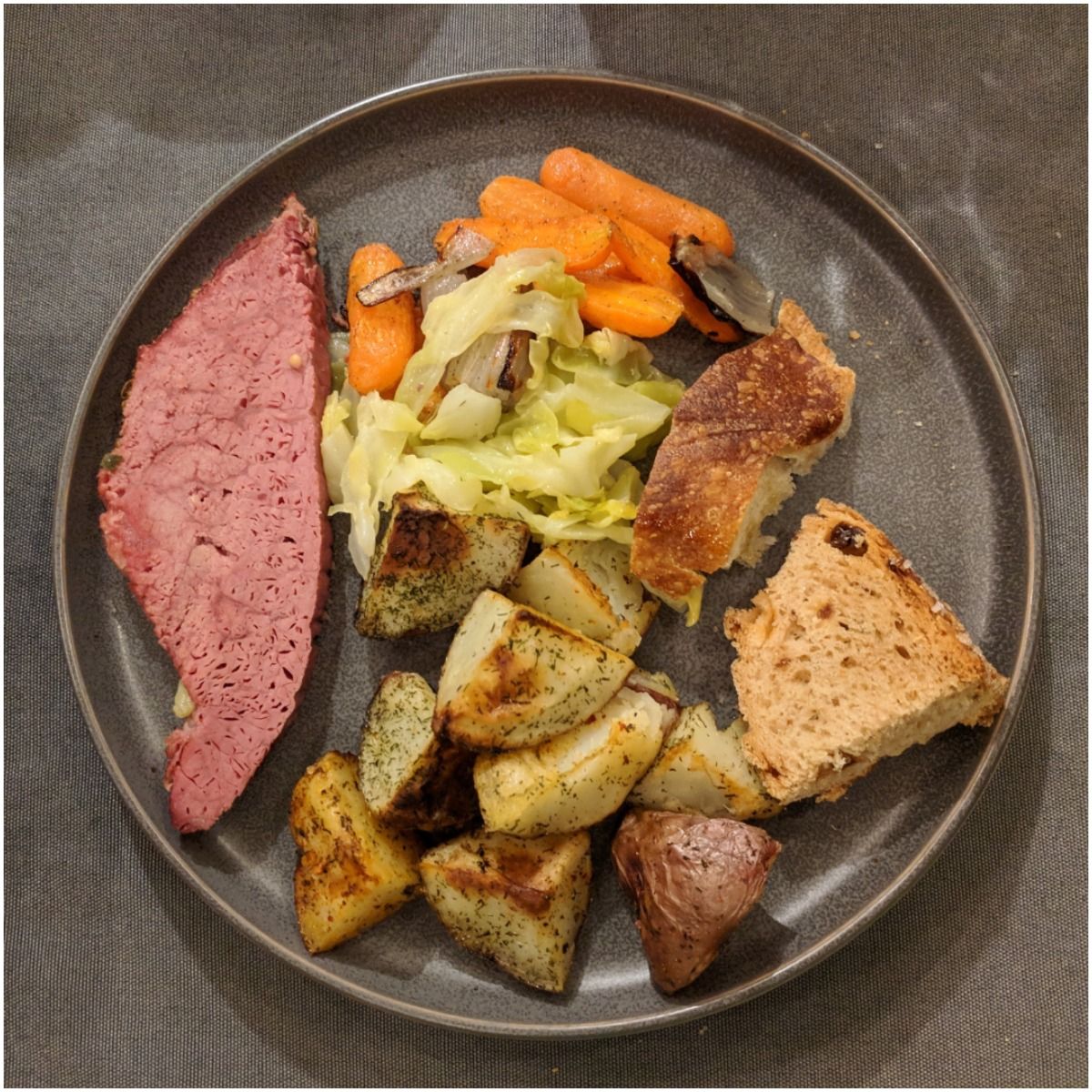 Corned beef can be cooked in many ways, such as baking, boiling, or roasting, since it is not a delicate meat.

Typically, briskets have two distinctive side; one side having a thick fat cap called the fat side, and the other side which is predominantly meat.

Now the question of whether it is better to cook them fat side up or down depends on the cooking method you choose and how you love to consume your meat.

Some people are of the opinion that if you are cooking your corned beef using a method that brings the meat in direct contact with the heat source like roasting or grilling, cook the meat fat side down.

Here are a couple of reasons why.

The disadvantage with cooking fat side down is if your grill or cooker has a top heat.

This can cause your meat to dry out. So, in this case, you should cook fat side up. 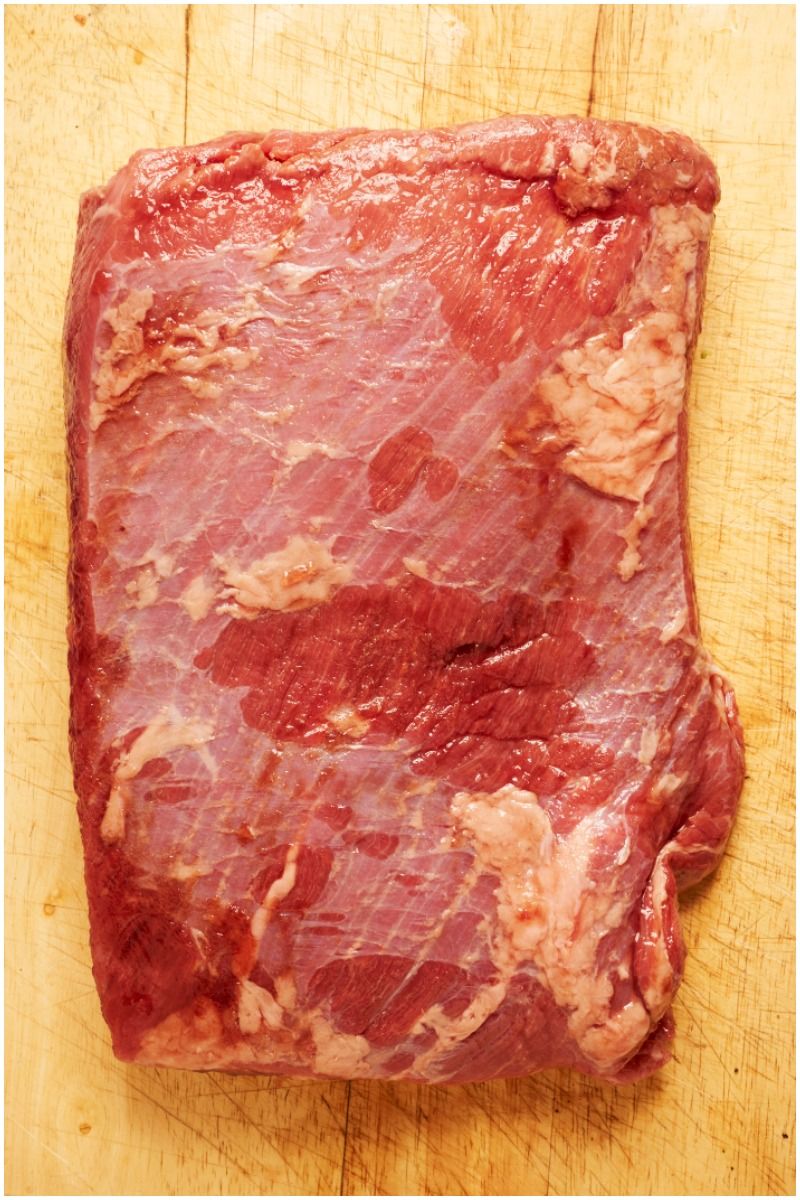 While for some people cooking corned beef fat side down is the way to go, for others, cooking it fat side up is the better way to go.

Cooking fat side up allows for the meat to be in direct contact with the heat source allowing the development of hot spots on the meat, which yields good and tasty bark formation. Some people enjoy the thick bark that is the result of fat melting and dripping from the top, when they roast or grill fat side up.

However, cooking fat side up needs care as you must manage hot spots properly and not poke holes into the meat as it cooks. Another downside here is the close management of grilling temperature as the meat cooks.

Additionally, you will have to constantly monitor the intensity of smoke arising from the coals as fat drips hit them. Too much smoke may make the meat bitter and unsuitable for consumption.

Corned beef can also be cooked fat side up by baking.

First, the meat is boiled briefly to wash off excess salt. The boiled water is then discarded, the corned beef seasoned and wrapped inside a foil paper fat side up, placed in a baking pan, and baked for about two to three hours at about 350oF. Baking fat side up gives a pleasant dark brown color at the top of the meat, characteristic of baked foods, which is the result of Maillard browning.

With baking, cooking fat side is safer unlike roasting, because the meat is not directly in contact with the heat. First, it is wrapped in foil paper. Secondly, the foil paper is placed on a baking pan, which further shields the meat from direct heat, and lastly, the baking pan is placed on a grate in the oven.

Besides with baking, you can properly control the cooking temperature without stress, and ensure uniform cooking of your meat.

READ MORE: What Happens if You Drink Protein Shakes Without Exercising? 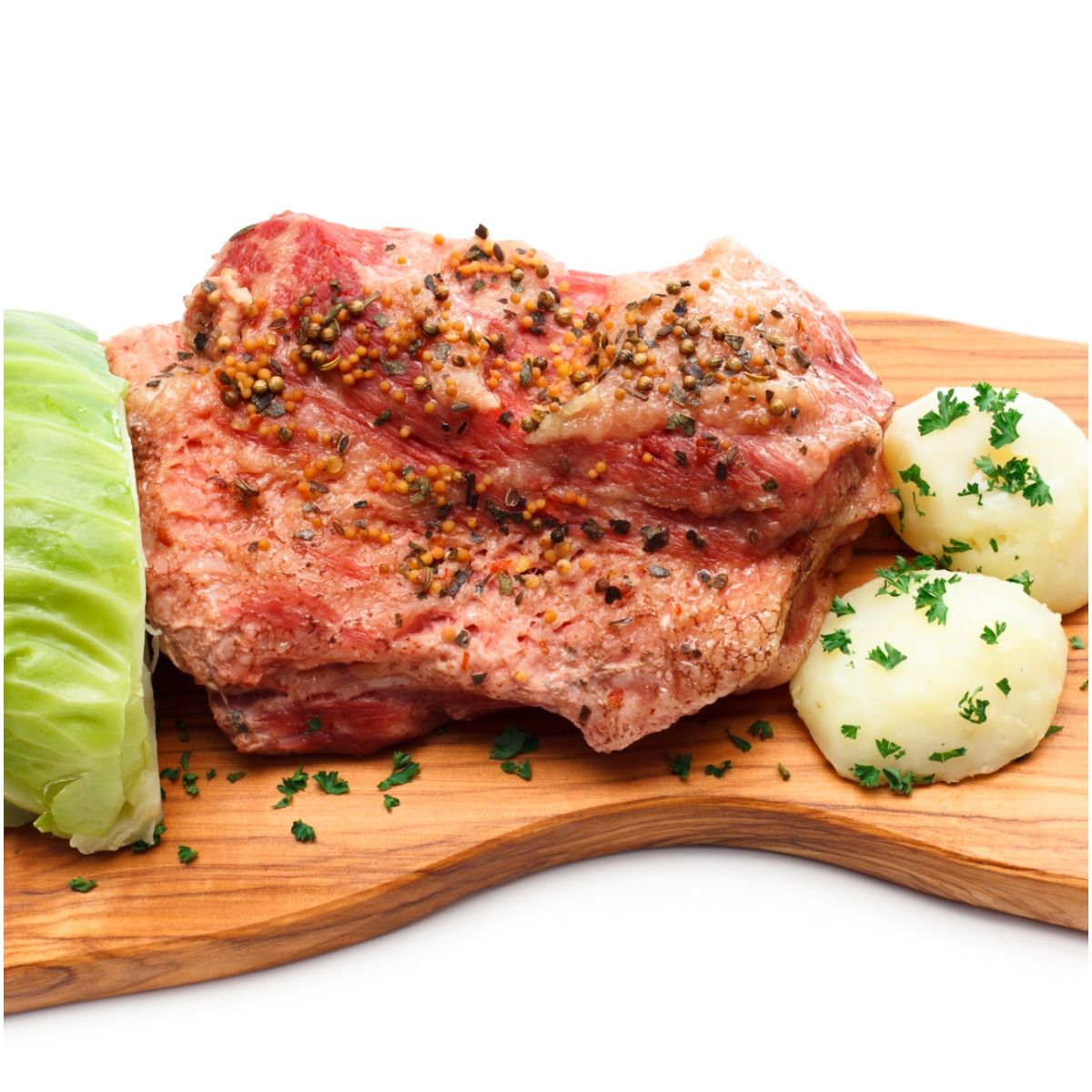 Corned beef is cured meat that can be used in versatile ways in the different cuisines of the world. It can be cooked fat side down as well as fat side up, all depending on the cooking method that is employed at the time.

Also, if you are cooking your corned beef (especially using a method like roasting or grilling) and notice that it is drying out, you can add moisture to your meat by spraying it with a liquid such as water, apple juice, apple cider vinegar to it every 30 minutes interval or one hour interval.

READ THIS NEXT: 4 Reasons Why Your Sneeze Smells