This article reveals the differences between thyme and oregano:

It is the leaf in the mint family – Thymus vulgaris. It has been used in ancient times in countries such as Egypt and Greece for various purposes, like – seizures and embalming.

Thyme can be used either dried or fresh and possesses a strong, characteristic odor that bears a slight similarity with mint.

It is an aromatic perennial herb that can grow to approximately 2 feet in height. Oregano is native to the Mediterranean region. Currently, Turkey is one of the largest exporters.

In Italy and Greece, it is commonly used at weddings since it is considered to be a symbol of joy.

Oregano is also seen as a staple herb in a variety of comfort foods, vegetable dishes, soups, and scrambled eggs.

The most active ingredient found in thyme is thymol, which has a wide range of effects on the body, including its capacity to prevent viral and fungal infections, hence reducing strain on the immune system.

Moreover, thymol is 25 times more efficient than phenol, a powerful antiseptic used in medicine. Thymol may also help to increase omega-3 fatty acids, according to a 2005 study published in ”Nature.” 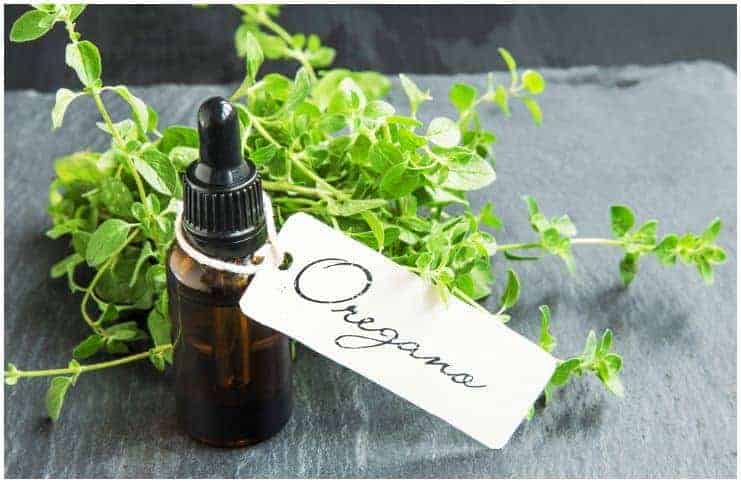 Note – the chemicals which give the herb its flavor are carvacrol, ocimene, thymol, pinene, limonene, and caryophyllene.

Thyme is a good source of carvacrol and thymol that have powerful antifungal, antibacterial, and antiviral properties. Due to this fact, thyme is very effective in fighting against the numerous disease-causing microbes.

Note – due to its antibacterial and antifungal attributes, thymol is found in the formula of a variety of antiseptic mouthwashes which are sold in pharmacies to treat canker sores, infections of the throat and gums (gingivitis), inflammation of the mouth, and halitosis (bad breath).

Thyme is an excellent source of antioxidants like apigenin, saponins, luteolin, and tannins. These compounds help neutralize free radicals (a group of atoms that have an unpaired electron) before they can cause oxidative stress and harm.

Also, this vitamin is essential for the maintenance of the arterial wall and the regulation of cell growth.

Signs and symptoms of a deficiency in vitamin K may include:

1 tbsp (4g) of dried thyme contains 22mcg of vitamin K which is about 30 percent of the daily recommended intake.

A 2009 study done at the Department of Experimental Medicine and Biochemical Sciences, Rome, Italy established that treating human colon cancer cells with an extract from oregano helped kill the cancer cells.

Another 2014 study conducted at the Department of Physiology and Pharmacology, Federal University of Pelotas, Brazil, and issued in the Journal of Medicinal Food established that a compound found in oregano, called – 4-terpineol, was effective at inhibiting the spread of cancer cells.

Heartburn is a sour or bitter taste in the mouth and throat along with a burning feeling in the lower chest. The condition occurs when the valve between the esophagus and the stomach are unable to prevent the acid in the stomach from passing back into the esophagus.

Several of the active compounds found in oregano can help digestion by relaxing the muscles of the gastrointestinal tract. This reduces the incidence of heartburn.

Fiber is a carbohydrate that isn’t broken down and absorbed by the body and is found in plant foods, like – fruits, beans, nuts, grains, seeds, herbs, and vegetables.

Here are some benefits of dietary fiber:

1 tbsp (4g) of dried oregano contains 1.6 grams of dietary fiber which is about 6 percent of the daily recommended intake.

Calcium is an essential mineral that helps your body with:

1 tbsp (4g) of dried oregano contains 80 mg of calcium which is about 8% of the daily recommended intake.

Both thyme and oregano are popular herbs that are often used in cooking.

Thyme has a gentle flavor and a taste that is a bit earthy with minty and lemony tones.

The taste of oregano has a little sweet and bitter flavor and it gives you a peppery flavor. Dried oregano has a stronger flavor than the fresh one. The Mexican type has a distinctively different flavor that is less minty and less bitter than the other types.

When choosing an herb for cooking, it is important to keep these differences in mind in order to get the best flavor for your dish.